The Big Conversation was launched at the 2021 NASUWT Black Teachers’ Consultation Conference with a view to wider engagement with the membership on furthering the Union’s ongoing campaign for racial justice.

‘Racial justice is the systematic fair treatment of people of all races, resulting in equitable opportunities and outcomes for all. Racial justice - or racial equity - goes beyond ‘anti-racism’. It is not just the absence of discrimination and inequities, but also the presence of deliberate systems and supports to achieve and sustain racial equity through proactive and preventative measures.’ -- Racial Justice in Education, National Education Association, United States of America. 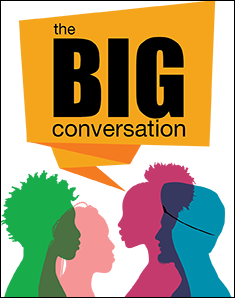 The NASUWT’s campaign builds on the Act for Racial Justice Campaign and comes as a direct response to a motion (2b) debated at the Union’s Annual Conference in 2021. The motion refers to a number of actions from the NASUWT in their stance to ‘oppose all forms of racism, prejudice and hatred in the education system, workplaces and in our communities.’

To this end, the NASUWT has a dedicated mailbox, Big Conversation, which Black members can use to share their stories and raise their concerns. Members should use this inbox to contact the NASUWT with stories or suggestions on securing racial justice for all.

The NASUWT has planned a series of regional/national events that will consist of two meetings, one for Black members and a separate meeting for all members.

Each meeting will have two elements to them. Attendees will be asked to discuss their experiences of:

Each member will be sent notification of the date and time of their regional/national meetings. Please look out for the invitation in your inbox.

All NASUWT members will receive a questionnaire, which has a number of questions around members’ experiences of racism within the NASUWT and the wider community. It is imperative that members complete this questionnaire and return it, as the responses will help to form part of the discussion at the regional/national meetings.

2b Motion: Securing Racial Justice and Anti-Racism at Work

Conference reaffirms its commitment to tackling all forms of racism, prejudice and racial injustice in the workplace and wider society.

Conference notes with concern the damning evidence of widespread and systemic racial disparities in employment.

Conference deplores the continuing levels of racist incidents in schools and colleges and the failure of governments and administrations to support an education curriculum that promotes racial justice and anti-racism.

Conference further notes with extreme concern the evidence from the 2021 NASUWT Black Teachers’ Consultation Conference which confirmed that:

Conference condemns the failure of governments and administrations during the pandemic to publish assessments of the race equality impact of Covid-19 emergency measures.

Conference asserts that Black Lives Matter and condemns the UK Government’s Policing, Crime, Sentencing and Courts Bill which represents a further attack on civil liberties and the right to peaceful public protest against racism and other forms of injustice.

Conference endorses the NASUWT ‘Big Conversation’ on racial justice at work and in the Union, and endorses action by the National Executive to:

Conference further endorses action by the National Executive to work together with other trade unions and civil society organisations nationally and internationally to oppose all forms of racism, prejudice and hatred in the education system, workplaces and in our communities.

If you require specific advice from us, please use the details on our Contact Us page.

We love reading all your feedback because we always want to be improving the website, but all comments you leave below are processed anonymously.