The NASUWT has collaborated with the Crown Prosecution Service (CPS) to produce an updated version of its LGBT+ Bullying and Hate Crime Schools Project pack.

The pack for teachers of Key Stages 3 and 4 provides teachers with resources that aim to protect potential victims of bullying and hate crime by deterring would-be abusers and encouraging and supporting victims of identity-based bullying to report incidents.

Chris Long, Chief Crown Prosecutor and CPS national lead on hate crime, said: "Education and working with young people is key to tackling hate crime generally. This is not about prosecution of youths, but about prevention and educating future generations on homophobic and transphobic hate crime and supporting victims in reporting hate crime.”

You can read more and download the pack using the link on the right/below. In order to safeguard the young people featured in the resources, you will need to be issued with a username and password by the CPS to download the resource. Please email [email protected] direct.

HATE CRIME
The term ‘hate crime’ can be used to describe a range of criminal behaviour, such as verbal abuse, intimidation, threats, harassment, assault and bullying, as well as damage to property.

The following definition has been agreed between the police and the CPS:

The LGBT+ Bullying and Hate Crime Schools Project pack is an updated version of the CPS's popular 2014 pack, developed in partnership with a number of organisations, including the NASUWT, Stonewall, the National Police Chiefs’ Council (NPCC), and Gendered Intelligence. 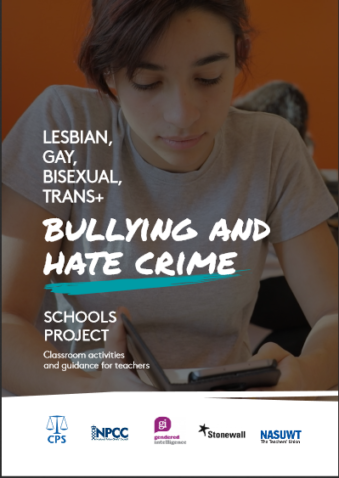